Our experience of the Antarctic weather, so far, has been a delight (but this brings its own challenges…). Low winds, sunny/overcast skies with the most dynamic clouds (I love dynamic clouds, see timelapse), and temperatures of -10 to -1°C. Entirely acceptable weather to do survival training in. In fact, I’ve been warmer in Antarctica than I was in Canberra. Seriously, sort your building design Canberrans.

Our FTO (field training officer) was a lovely bloke nicknamed Psycho. The name came from an incident 15 ish years ago on station where he dressed up as the guy from the movie Psycho…. topped off a fully revved chainsaw (sans chain). The course involved some navigation work, sea ice awareness (don’t fall through the sea ice), and good tips about what to do in a blizzard.

We trekked to Shirley Island, about 2km from station, which involved walking over some thinning sea ice. Shirley is known for its Adelie penguin colony. They’re the most adorable stupid things. I couldn’t stop laughing / gawking as they waddled around on the rocks. One was particularly inquisitive and decided to come see what we were doing on the ice. I scored some pretty good shots before it waddled away, flippers outstretched. Hilarious. 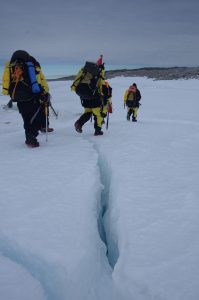 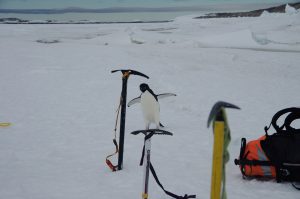 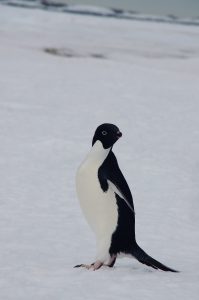 We also had to camp out overnight in an emergency bivvy, locally referred to as a chip packet. It’s literally a giant orange plastic sack with a tie at one end that you sleep in. We dug a little ‘grave’ that we could nest in overnight. We’re told if the winds pick up (think >90 knots) having our chip packet dug in a bit will make for a more pleasant experience. So, we slept in a orange chip packet (body bag) in an icy grave. I did poke my head out at about 2 or 3 am to see the sunrise (or sunset… I’m not quite sure). It cast the most beautiful reds and oranges over the normally blue/white ice.

There is one issue with the whole chip packet thing. Condensation from your breath / body ices on the inner surface of the bag. As it flaps in the wind it gives you little moist slaps on the face… I suppose it isn’t supposed to be all fun.

2 Comments on “Survival in the Antarctic”

We made it!
Why good weather isn’t always good…
←
→